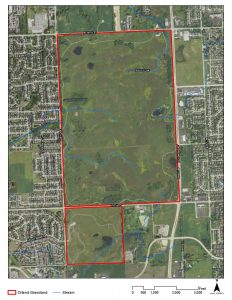 Originally purchased by the Forest Preserve District of Cook County (FPDCC) in the 1960s, Orland Grassland is a 960-acre land and water reserve located in southwestern Cook County. Historically the area was wetter grasslands ranging from sedge marshes to wet-prairie habitat but had succumbed to draining and cultivation by the 1900s. 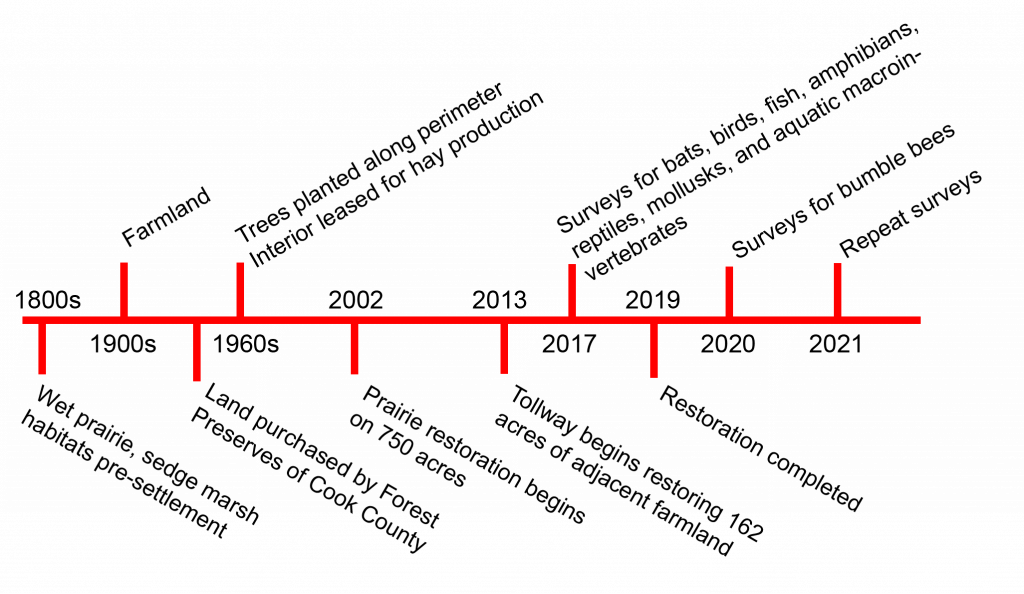 The Forest Preserves planted trees along the perimeter leaving an interior tract of grassland habitat used as agricultural lease land for haying.

Intensive restoration efforts by the FPDCC have resulted in the conversion of 750 acres back to open prairie habitat since 2002, with the remaining 210 acres managed as wetlands and woodlands.

In 2013, the Illinois State Toll Highway Authority (ISTHA) partnered with the FPDCC to restore a 162-acre former farm adjacent to Orland Grassland as mitigation for the Jane Addams Memorial Tollway (I-90) rebuilding and widening project.

We began surveying at the site in 2017 to document the aquatic macroinvertebrate, bat, bird, fish, amphibian, reptile, and mollusk species that currently use the site in its early restoration phases. Overall, our results suggest Orland Grasslands South already provides habitat for sensitive bat and bird species, and with some management effort, it could benefit aquatic species.

In 2020, we conducted bumble bee surveys at Orland Grasslands. We did not encounter the Rusty Patched Bumble Bee, but did detect 8 species across the site, including the American Bumble Bee, an SGCN in the established prairie.

In 2021, we surveyed for bats, birds, dragonflies, butterflies, amphibians, and reptiles: