In 2015, post construction, we conducted fish, mussel, aquatic macroinvertebrate, and bird surveys in the corridor and found:

For birds we conducted searches and circular plot counts and found

We used minnow seines and backpack electroshockers to survey.

There was no significant difference in species richness, community evenness, and species diversity compared to our 2012 samples

In the Kishwaukee River

For aquatic macroinvertebrates we used the ILEPA 20-Jab Allocation Method 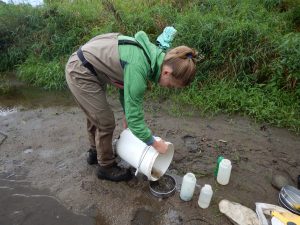 In 2016, we deployed acoustic monitors at 4 stream crossings