Silver and Bighead Carp are exotic invasive fish stocked originally in farm ponds. After escapes and  accidental releases into streams, these fast-growing, prolific  breeders have made their way up the Mississippi River and into the Illinois River drainage, devastating biotic communities. As they  advance towards the Great Lakes, they threaten a multi-billion-dollar fishery.

Various strategies have been implemented to prevent their spread, including bubble nets and electric aquatic “fences.” During high water events, the Des Plaines River can overflow into the Chicago Sanitary and Ship Canal, providing a potential unprotected pathway for Carp to reach Lake Michigan.

In 2010 a 13-mile concrete and steel mesh wall was put in place to keep the Des Plaines River and the Chicago Sanitary and Ship Canal separate during flood events.

The barrier keeps carp out but may also restrict animal movement (especially reptiles and amphibians) between the Des Plaines River and adjacent wetlands.

Twenty gates were installed in the barrier to allow animal movement, specifically the state endangered Blanding’s Turtle, and are closed during flood events. 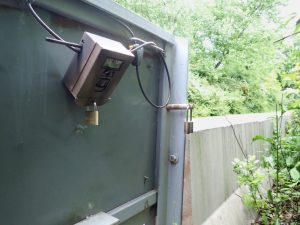 Other Amphibian and Reptile research